The spark of hope. 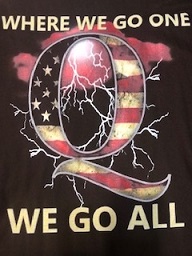 For quite a long time I have been growing in doubt that we can ever stop rotting our Western civilization. Observing over the years that speeding up like a civilized world faster and faster in the direction of self-annihilation, I began to doubt a better future.Corruption which has swept through this whole political, economical and media system, where in the European Union the principals are nominating themselves and creating idiotic regulations. Where pedophile, Satanism, children trafficking and compulsion for vaccination allow psychopaths to do whatever they want. It would seem that we are heading to the next world war and it is inevitable.

But there is a spark in the dark. Somewhere like, almost two years ago, I learned about “Q Anon” for the first time. As you probably already know, it is a kind of information platform that transmits partially coded information to slowly make people awaken.

And from the information provided by Q and from what I learned from better informed people, there are changes coming, big changes around the world, although so far it mainly concerns the United States.President Donald Trump is no longer supervised by the people who supervised his predecessors.And now he has support in a well-prepared group of people, whose aim is to stop all that we have had so far and return to real reality. My soul begins to rejoice. There is hope for a better future.

I am beginning to believe more and more in a future, in a normal life where people, the environment and nature are respected. Where everyone has the right to live unrestricted by senseless regulations to the best of their abilities, without harming the other.

Probably more than one will think that it is unrealistic. Well, it’s their business.

Do not listen to the mass media, they lie.

Observe Q Anon and preserve leading politicians around the world.

It probably do not get to Poland yet, but it will arrive. Panic in DC already.

Something new is coming.