In this series of articles, I’ll share what I have uncovered so far about my Scottish, Irish, and Polish lineages and how they all connect. Check out previously posted Ancestral Stories: Immigration to America—Lowell, Massachusetts, and Ancestral Stories: Scottish Highlanders

I took this photograph when my sister and I took a tour through Ireland and Scotland in 2015. Our tour bus had just crossed the Irish Sea on a ferry from Northern Ireland and landed in Cairnryan, a village on the southwest coast of Scotland.

I’ve been researching the DNA of the Scottish people and have found the following genetics.

These genetics are common throughout Scotland, Ireland, and Britain. 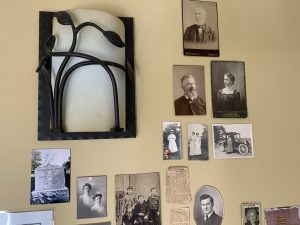 The picture above is a Lowlander view of my ancestry wall. This image is a collection of photographs and a couple of newspaper articles. The man in the oval picture next to the newspaper articles is my maternal grandmother’s father, Thomas M. Waugh. He is one of my great grandfathers.

Thomas was born in Ancaster, Ontario, Canada in 1875. Ancaster is just outside of Hamilton, Ontario, which is Canada’s largest iron and steel manufactures.

Thomas was the 11th child from a family of 14 children. His parents were both born in Moffat, Scotland. His mother was Helen Murray, and she was his father, John Waugh’s second wife. At 16, he, his parents and some of his siblings moved to Lowell, MA.

According to my Waugh cousin, we are the seventh generation from Robert Waugh and Jean Rule, who were married around 1776 in Dumfriesshire, Scotland.

The Waugh Family Y DNA indicates that our Y DNA haplogroup may have originated in the south of Sweden. There are references to the Ru Viking from Sweden. The Y group pool is extraordinarily diverse and has proven to withstand anything.

As I mentioned in my first post, back in 2014, I acquired all my mother’s papers and our family photographs. As I started to sort and sift through all this information, I asked my mother various questions about our lineages. As I was sorting through the Waugh photographs and papers, I found out that the Waugh Family Bible was mistakenly sold back in 2006 during an estate sale. My mother told me this Bible listed the dates of births, deaths, and marriages of this Scottish Lowlander family. I was genuinely disappointed; however, at the time, I let it go.

Fast forward to some time in 2016; I found a Deed to a cemetery lot in Lowell, MA, to a man named John Waugh, who I would find out later is one of my great-great-grandfathers. I found the information on Find a Grave; I also saw a link to a Waugh Family website. This site is extensive. My close friend, who is a semi-professional genealogist, told me she’s never seen such a complete and in-depth site.

It took me over a year to read and understand this web site. One day as I was rereading the Waugh information, I saw a link to a source document on genealogy.com. As the link opened, I read that information was from a family Bible that had been purchased in an estate sale at my mother’s previous address. It took me a few minutes to put the pieces together. The woman who bought this Bible at my mother’s estate sale had put the information in it on genealogy.com, then sold the Bible on eBay. I was overjoyed. I could hardly believe my good fortune.

Here are some of the genetic mind-patterns I’ve identified in my Scottish Lowlander Ancestors. 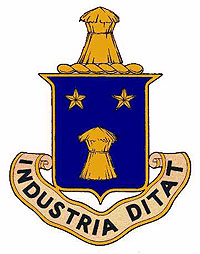 Our family motto is “Industria Ditat” – “industry enriches.” Industry, in the broadest sense, brings prosperity and fulfillment to our lives. The Coat of Arms has a gold wheatsheaf and two stars at the top. If my mother were still living, I’d ask her why she purchased a decorative wheatsheaf every fall and place it in our living room? I don’t believe my mother ever saw this Coat of Arms.

Have you been thinking about your genetics? I would be interested in your thoughts and comments